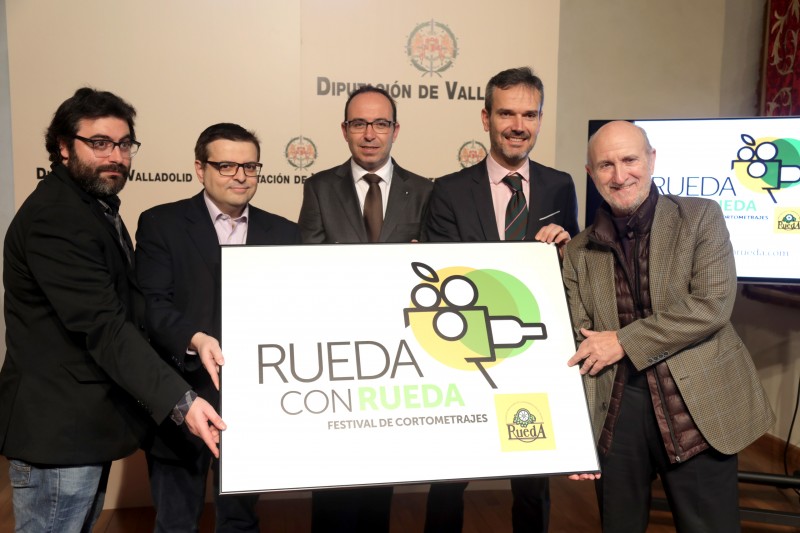 The best short film will be awarded €5,000. There is no theme required and the short can be filmed anywhere in the world. The main requirement for submission is that at least one bottle of D.O. Rueda white wine must appear in submitted films.

D.O. Rueda have announced that submissions are now open for the 3rd online short film festival “Rueda con Rueda”. This competition is supported by the Valladolid International Film Festival (SEMINCI) and the Valladolid County Council in a bid to promote Designation of Origin Rueda among young people and discover budding filmmakers.

Festival organisers, Pedro del Río and Jaime Alonso de Linaje, from the film producer Plan Secreto, presented this year‘s requirements for submission along with the location guide and a video summary of some of the locations available for filming. The main regulation for submission is that at least one bottle of D.O. Rueda white wine must appear in submitted films. No theme is required, and the short can be filmed anywhere in the world and in any language, as long as it has Spanish subtitles. The winning film will be awarded €5,000.

The festival also gives filmmakers the chance to film on the premises or in the vineyards of 37 Designation of Origin Rueda wineries. The shorts filmed in the D.O. Rueda can be submitted to the festival‘s main award as well as the “Origen Rueda” award for the best short filmed in the designation of origin locations, with a €3,000 prize.

A special award is open for film and audiovisuals students attending a film school, university or audiovisual programme, with a €2,000 prize.

All shorts must be submitted by 8 October 2018. The regulations for submission are available on the festival‘s website: www.ruedaconrueda.com. All participants will submit their films via the platform on the website. All videos will also be displayed on the festival‘s YouTube channel.  A panel of expert judges will select a shortlist of films and the three most viewed videos on the Rueda con Rueda YouTube channel will go straight to the final.

Prizes will be presented during the “Cine & Vino” cycle, which is part of the next Valladolid International Film Festival (SEMINCI). In addition to the cash prize, the three winning “Rueda con Rueda” shorts will benefit from invaluable visibility, as they will be screened as part of the cycle‘s activities, which is in its fifth year in 2018.

The winning short films from the past two festivals saw huge success at other film festivals. Slow Wine, directed by Mario Hernández and Guillermo Rodríguez, won the first Film with Rueda Festival and was awarded two prizes at the Five Continents International Film Festival, among others. It was also submitted to the Italian Roma Cinema DOC festival.

El origen, directed by José A. Campos and winner of the best short filmed in a winery last year, has been shortlisted at several festivals, such as Plasencia en Corto, La Fila and the Medina del Campo short film festival.

Watch the two winning short films from the first edition and the first prize short from the second edition on the festival website and the “Film with Rueda” YouTube channel:

*Please find attached the list of 37 D.O. Rueda wineries that participate in this initiative and the video presenting the locations available. https://youtu.be/xEJG-dqtI4A